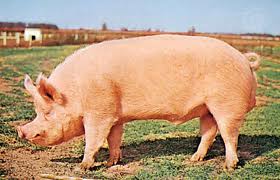 Yorkshire, also called Large White, is a breed of swine produced in the 18th century by crossing the large indigenous white pig of North England with the smaller, fatter, white Chinese pig.

The well-fleshed Yorkshire is solid white with erect ears. Although originally a bacon breed along with the Tamworth, the Yorkshire rose to prominence in the lean-meat category during the 20th century in the United States. The boar is used considerably as a sire of crossbred litters out of coloured dams. The Yorkshire is probably the most widely distributed breed of pig in the world.